About the 2020 Annual Adult Education Conference and beyond

“COVID-19 has shaken us – our beliefs, habits, established ways … We survived the first wave with a few scratches, by plunging headlong into the unknown and by moving the seemingly immovable. What we could not do then, we postponed until autumn – with the concern that things might become even worse. Well into autumn, we realised that excuses were no longer an option and that radical change was inevitable. Being open to change and taking a proactive stance to it was no longer just evidence of a flexible mind but rather a condition for survival. We saw that things will not get any better (or rather, as they were before) in the future if we do not break free from the bonds of the restrictions and embrace the freedom within the realm of possibility, however differently that might be perceived. Serious stuff, no doubt about it. And how were we supposed to have a nice time considering all this?

We managed, though. Not only as individuals but as a community – at the AAEC on 17 and 18 November 2020. Excitement over the event is based on the completed evaluation questionnaires, comments in Zoom and personal messages received by the organisers. Since the contributions were recorded in advance, we could keep to the schedule. There were many of us, over 330 on the first day, for which we are extremely thankful. We believe that through our joint efforts, we managed to infuse the collective consciousness with a bit of positive energy, which is sorely needed due to the inevitable change mentioned above – including in (adult) education.” Zvonka Pangerc Pahernik, SIAE 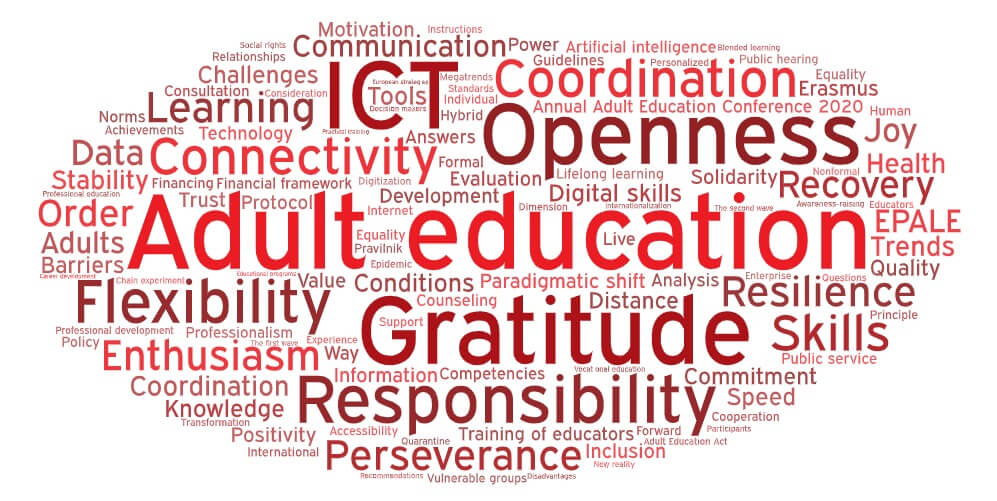